The work of pioneering digital media artist Jennifer Steinkamp inaugurates Street Views, a two-part series of large-scale video works that will be projected onto CAM’s Washington Boulevard facade from fall 2013 through spring 2014. Steinkamp creates animated video projections that investigate motion and perception. Her installations blur the boundaries of real and illusionistic space and immerse the viewer in a digital environment.

For CAM, Steinkamp presents Orbit, a computer animation featuring trees, vines, and various plants being blown by turbulent winds and changing with the seasons. From budding flowers to gnarled, naked braches, the plants spin through a constant loop of spring, summer, fall, and winter in a sped-up passage of time. The work is seamlessly executed, with each unique species of plant carefully depicted and individually choreographed. Though almost recognizable, each plant is fictitious, Steinkamp’s own creation.

Orbit transforms CAM’s metal and concrete facade into a naturescape and perforates the surrounding concrete jungle with a view to an uninhabited forest. The video work plays with viewers’ perceptions of the two- and three-dimensional as its vines, trees, and plants swirl and roil through a deep space that appears to puncture the planes of the building. A beacon for passersby and a striking and unexpected illumination of streetscape, Orbit enlivens the neighborhood with a hauntingly beautiful and monumentally elegiac work that is accessible to all. 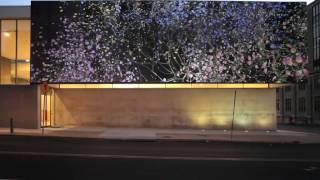 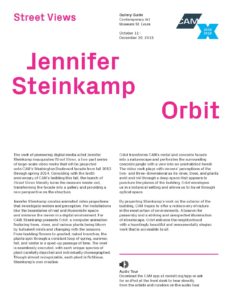 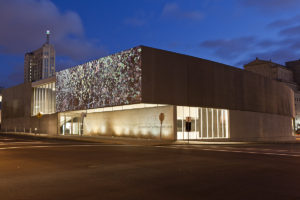 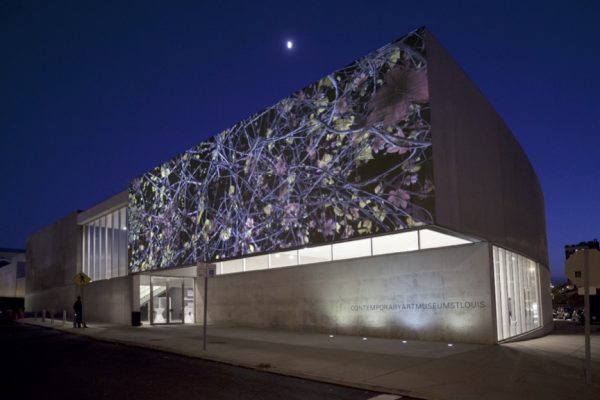 Jennifer Steinkamp’s still-life drives us to ask: Can art be both beautiful and critical?