A focused selection of five large-scale “postcard sculptures” by celebrated German artist Katharina Fritsch, Postcards features works made by enlarging and silkscreening images originally found on travel postcards onto sheets of shaped plastic. By transforming small-scale kitsch souvenirs into monumental sculpture, imagery that was once whimsical and benign becomes surreal and disquieting.

Since 1993 Fritsch has produced a diverse body of work that mines the process of how we remember. Through her precise fabrication, pristine matte surfaces and densely saturated pigments, Fritsch encourages viewers to experience the quotidian in unexpected ways. Known primarily for hyper-real, monochromatic sculpture, the artist employs deadpan humor and shifts in scale to communicate the strangeness of memory and the emotional resonance of cultural objects. In this body of work, Fritsch elevates the süsses Kitsch, or “illustrated postcard,” from its status as an art historical pejorative into avant-garde aesthetic.

Fritsch’s Postcards are simultaneously deeply personal and universally accessible: 5. Postkarte (Essen), which portrays her place of birth, is imbued with autobiographical significance, while 1. Postkarte (Ibiza) celebrates not only the objectification of its male subject but memory itself. Fritsch reminds us that the process of remembering is itself an act of distortion.

Katharina Fritsch (b. 1956, Essen, Germany) lives and works in Düsseldorf. She represented Germany at the 1995 Venice Biennale and has been included in numerous international exhibitions, including Documenta 13, Carnegie International, Skulptur Projekte Münster, and Sydney Biennial, among others. Fritsch has had solo exhibitions at the Dia Center for the Arts, New York; Kunstmuseum Basel; San Francisco Museum of Modern Art; Art Institute of Chicago; Tate Modern; and K21 in Düsseldorf. A retrospective of her work debuted at the Kunstmuseum Zürich (2009) and traveled to the Deichtorhallen Hamburg. In 2013, Fritsch was awarded the prestigious Fourth Plinth Commission in London, where her sculpture Hahn/Cockwas exhibited in Trafalgar Square. 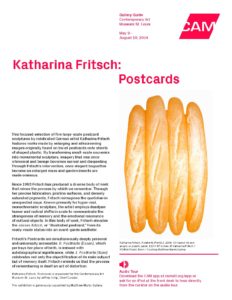