The multifaceted artist KAWS is renowned for his inspired manipulations of pop-culture imagery, a practice that began in the early 1990s when the artist painted over existing advertisements in cities around the world. Since that time KAWS’s practice has encompassed realms of both art and design, extending into collaborations with such global brands as Comme des Garçons, Nike, Supreme, and Uniqlo.

For FAR FAR DOWN, the artist creates a site-specific painting on CAM’s 60-foot long Project Wall, the large-scale work serving as a backdrop for three new major paintings. In the Museum’s courtyard, KAWS debuts the most recent permutation from his sculpture series, TOGETHER—bronze painted figures in a consoling embrace. TOGETHER is immediately endearing, and at the same time evokes pathos and contemplation. The paintings on view on the Project Wall deliver a sustained visual display of clashing patterns and vibrant colors, with barely recognizable popular figures inlaid within the scenes as deceptively as camouflage. The title of the exhibition and the eponymous painting implies physical or emotional descent, although the status of the concealed forms within the work are open to conjecture.

KAWS draws profound links between popular culture, commercialization, and the human condition. Rather than pose a critique of mass culture, however, he makes associations with a wide audience through his identifiable imagery. KAWS incorporates a playful style with a serious formal aesthetic—his dedication to craft, respect for the handmade, and lightness of spirit all conjoin.

KAWS (b. 1974, Jersey City, New Jersey; lives and works in Brooklyn), has exhibited internationally in major museums and galleries. His most recent solo exhibitions include KAWS: WHERE THE END STARTS at the Modern Art Museum of Fort Worth and Yuz Museum, Shanghai; KAWS: GISWIL at More Gallery, Giswil, Switzerland; Galerie Perrotin, Seoul, Korea; and Yorkshire Sculpture Park and Longside Gallery (2016). His work has also been the subject of solo exhibitions at the Brooklyn Museum, Nerman Museum of Contemporary Art, Pennsylvania Academy of Fine Arts, and the High Art Museum. KAWS received his BFA from the School of Visual Arts 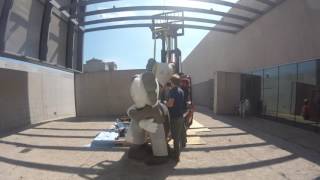 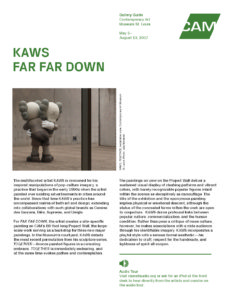 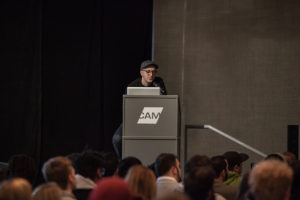