Laura Riboli’s art practice is a continual investigation of spatial relationships between geometry and the body, registering as theoretical musings on the ideal and the actual, grounded solidly in Modernist speculation. Her video work combines stop-motion with real-time film footage, sculpting out the iconography that occupies her films with lithe gymnasts, dexterous hands grasping peculiar quadrilaterals, metamorphic aluminum-foil ziggurats and steles, perfect spherical shapes, hula hoops and white rubber balls. Together, these elements compose the visual language that constitutes Riboli’s lean and highly specific body of work.

In The Front Room, Riboli premieres her newest video work, Screens, slices (2010), in which various objects play within the confines of a small cubed space. Manipulating shapes in stop motion, she animates a series of black paper forms that accumulate, flatten, grow, and crawl through the white room. Between our vision of actual space, digital space, and the projection of the video itself, Riboli ultimately collapses all three, stirring our imagination of a form’s anthropomorphic occupation of space.

Riboli also presents a second suite of works, Rolls, tosses, rotations (ball) (2009) and Rolls, Passages, Rotations, Walkovers (hoop) (2009), in which she places her animated objects into real-time relationships with the bodies that manipulate them. Using a pearlescent ball and hoop respectively, a lone figure, dressed in a simple grey leotard, interacts with these objects in a series of gymnastic movements that demarcate the figure’s form and the contours of the object itself. 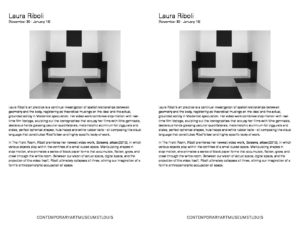