Louis Cameron’s art practice has spanned the media of painting, printmaking, photography, sculpture, assemblage, digital, video, and poster art, with the CAM exhibition focusing on two aspects of his recent output. CAM will be presenting the premiere of six photographs from Cameron’s Clouds series, to be displayed in CAM’s Front Room. The Clouds formal elegance will be contrasted by posters on view from the artist’s online initiative, The Poster Project presents. Whereas Clouds emphasizes Cameron’s aesthetic choices in the art-making process, The Poster Project presents reflects his concerns for an art that is politically and socially engaged. The Clouds photographs are produced with gallery/museum spaces and audiences in mind; the posters are made to inspire political thought and action, and are available as free downloads to the global internet audience.

The American artist, who currently lives and works in Berlin, turns a mobile phone to the sky each day and takes a photo of clouds, making chance—the “discovery” of the image—his art practice, rather than selecting or “seeking out” the image. He then layers the images over one another, “each picture inhabiting a different color space,” arranging those layers until he arrives at his desired composition based on color and spatial relations. Exhibiting the photographs in CAM’s Front Room will allow the natural light to play upon the images, so the Clouds may change, transform, and float before the viewer’s gaze.

The Clouds series suggests other Cameron works that have focused on his concerns for common space and shared experience at a time of growing government and police surveillance. In works such as Domain Awareness and Times Square Ring of Steel, Cameron examines the surveillance eye and its relationship to place, questions of identity within shared space, and the documentation of humanity moving through common space. In this respect, Clouds represent the ultimate shared space—the sky—which gives inspiration to a poetic body of work, a glimpse of a commons that is truly free and open.

With The Poster Project presents, Cameron makes use of the internet as a virtual public commons for international dialogue on contemporary cultural issues. Cameron recognizes the poster as a uniquely democratic art form, easily obtainable and commonly displayed in homes, workplaces, schools, and dorm rooms. Cameron has selected a group of artists to create portfolios that are made available for free here. CAM will exhibit the two current portfolios, I Am… and Immigration, in the Museum lobby.

Louis Cameron (b. Columbus, OH; lives and works in Berlin) has had solo exhibitions and projects at the Saint Louis Art Museum; the Jersey City Museum, New Jersey; The Kitchen, New York; The Armory Show; and I-20 Gallery, New York. He has also participated in group exhibitions in the United States and abroad at the Albright-Knox Art Gallery, Buffalo; the Contemporary Art Museum Houston; Portugal Arte 10, Lisbon; The Studio Museum in Harlem, New York; and the Dakar Biennial, Senegal. Cameron has been a Fellow in Painting with the New York Foundation for the Arts. His work is in the collections of the Albright-Knox Art Gallery and the Saint Louis Art Museum. Cameron has taught at Princeton University, Yale University, Brooklyn College, and Pace University among other institutions. He received his B.F.A from the University of Southern California in Los Angeles, and his M.F.A. from Tyler School of Art, Temple University in Philadelphia. He additionally completed the Artist-in-Residence program at the Studio Museum of Harlem in 2002-03. 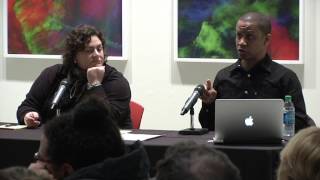 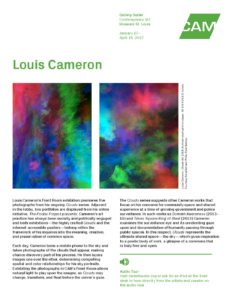 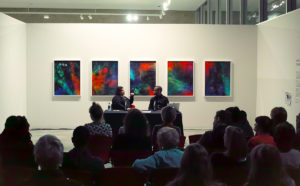 Clouds and The Poster Project presents by Louis Cameron