New York-based artist/filmmaker Marco Brambilla repurposes and recontextualizes the imagery of popular culture within complex and spectacularly energetic video collages. Emerging as an internationally exhibited video and installation artist after transitioning from commercial filmmaking, Brambilla is known for his technically ambitious approach to video production and editing. He has created pioneering 3-D works that push the bounds of new technologies, conflating past, present, and future in a fluid stream of consciousness. Brambilla’s films explore ideas of physical displacement and the psychological dislocation of the digital world; familiar characters are completely transformed within new contexts, becoming both beautiful and epic.

On view every night February 6 through April 11,  from dusk to midnight, on the Museum’s front facade, Materialization/De-Materialization exemplifies Brambilla’s exquisite formalist approach; digital ripples gradually evolve out of a black field to reveal a pattern of human silhouettes in various poses. Images seamlessly expand into the space through a series of elaborate, moving rings. The result is an incandescent video wallpaper, where groupings of hundreds of characters from the Star Trek television series materialize and dissipate within a perennial loop. Never fully revealed and always on the verge of departure or arrival, these figures become trapped in a perpetual state of transition in deep space. 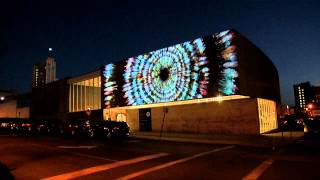 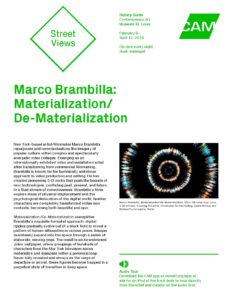