New Art in the Neighborhood

For Endless Return, New Art in the Neighborhood artists explored the ways in which contemporary artists have used sound as a material through experimental production and recording techniques. NAN examined sound’s inherent qualities, as well as how the senses are restricted by their own limitations of perception. Learning about record loops, graphic scores, “deep listening,” field recordings, motion picture soundtracks, improvised and popular music were are part of NAN’s process of discovery. Eventually, the vinyl record as archive and a material expression of sound became the vehicle for their studio projects. Pre-existent album cover art, text, and design became a canvas upon which the artists chose to respond or to re-create anew. The record itself became a metaphor for the cyclical nature of space and time, with the title of the exhibition inspired by the philosopher Friedrich Nietzsche’s idea of “eternal recurrence.”

We would like to thank the following artists for sharing their time, projects and ideas with us: Brian DePauli, Robert Aiki Aubrey Lowe, 18andCounting, Sarah Paulsen, Alex Cunningham, C. Spencer Yeh and Andrew Lampert. 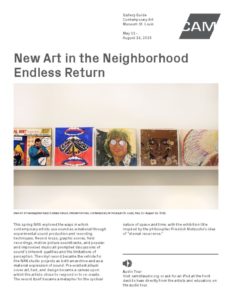