Readykeulous by Ridykeulous: This is What Liberation Feels Like™, organized by artists Nicole Eisenman and A.L. Steiner, who together form the curatorial initiative Ridykeulous, presents an array of emotionally charged works by over forty artists and activists.

Founded in 2005, Ridykeulous mounts exhibitions and events primarily concerned with queer and feminist art. Using humor to critique the art world as well as culture at large, Eisenman and Steiner often reinvent language to reflect their sensibilities and concerns. At CAM, Ridykeulous installs an expanded version of their 2011 exhibition at Invisible Exports in New York, Readykeulous: The Hurtful Healer. This presentation features printed ephemera from the Ridykeulous PATRIArchives™ as well as angry letters and diatribes across various media. Beginning March 7, the exhibition extends into the Front Room, featuring a selection of historically significant works of video art by Sadie Benning, Dawn Frasch, and others.

Nicole Eisenman (b. 1965, Verdun, France) lives and works in New York City. Eisenman was recently awarded the Carnegie Prize for her work in the 2013Carnegie International. Recent solo exhibitions include MATRIX 248, Berkeley Art Museum (2013); ‘Tis but a scratch’ ‘A scratch?! Your arm’s off!’ ‘No, it isn’t.,’ Studio Voltaire, London (2012); Nicole Eisenman: The Way We Weren’t, The Tang Museum, Skidmore College, Saratoga Springs, New York (2009); and Nicole Eisenman, Kunsthalle Zurich (2007). Her work has been featured in numerous group exhibitions such as NYC 1993: Experimental Jet Set, Trash and No Star, New Museum, New York (2013); and  the Whitney Biennial, Whitney Museum of American Art, New York (2012, 1995); among many others. Eisenman is the recipient of several awards, including a John Simon Guggenheim Grant, The Joan Mitchell Foundation Grant, and The Louis Comfort Tiffany Grant. Her work is in the collections of museums such as the Museum of Modern Art, New York; San Francisco Museum of Modern Art; and the Walker Art Center, Minneapolis.

A.L. Steiner (b. 1967, Miami) lives and works in Los Angeles. She is a collective member of Chicks on Speed, co-curator of Ridykeulous, co-founder/organizer of Working Artists and the Greater Economy (W.A.G.E.), and collaborates with numerous visual and performing artists. Steiner is Assistant Professor and Director of University of Southern California Roski School of Art & Design’s Master of Fine Arts Program and Visiting MFA Faculty at Bard College in New York. Her work has been included in solo and group exhibitions at the San Francisco Museum of Modern Art, San Francisco; Creative Time Summit, New York; P.S.1/MoMA, New York; the TATE Modern, London; among others. Her work is included in such public collections as the Museum of Modern Art, New York; the Brooklyn Museum of Art, Brooklyn; and the Marieluise Hessel Collection, New York.

Readykeulous by Ridykeulous: This is What Liberation Feels Like™ is organized for the Contemporary Art Museum St. Louis by Nicole Eisenman and A.L. Steiner. 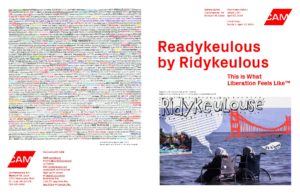