Drawn from the media, press agencies, databases, and archives, Sean Snyder’s films, texts, and photographic images consider the global circulation of information and the continuous evolution of its interpretations. Taking the 1964 Soviet documentary film Noble Impulses of Soul as its subject, Snyder’s film Exhibition (2008) examines the social conventions of art and questions what might be universal about the aesthetic experience. Exhibition remains on view for the entire season of The Front Room. In the original 1965 film, the narrator praises the efforts of a provincial museum in the village of Parkhomivka in eastern Ukraine, which presents an exhibition of contemporary Mexican art and an art history lecture at a village farm. rearranging the film’s components—eliminating the voice of the narrator and editing the chronology—Snyder represents the Soviet documentary as a rumination on the language of art and exhibition-making. At its heart, Exhibition is a video about art and what happens with art—its presentation, its reception, and the conversations it generates. 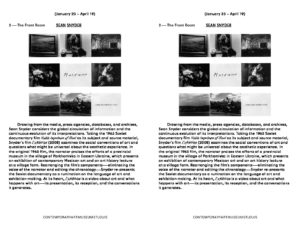