Croatian-born artist Vlatka Horvat works in a range of media, from video and photography to works on paper, performance and text. Often at the center of her practice is an interest in breakdown, fragmentation, and collapse, and the possibility of repair and renewal. In the Front Room, Horvat explores the effect of frames and systematic limitations placed on the body. In Parts Works, she reassembles fragmented body parts, cut from photographs, into “(im)properly assembled units.” On the floor she presents a large stack of white paper, each stamped with the phrase, “what remains.” As museum visitors remove each sheet and the stack shrinks, “what remains” becomes a site of both participation and disintegration.

Also invested in the behavior of written and spoken language is London-based German artist Eva Weinmayr, whose series of works based on newspaper headlines examine how complex realities are shrunk into sound bites. Drawn to the daily stream of information, she focuses on the narrow gap between fact and fiction and the notion of rumor. Her work addresses systems for immediate communication and spans from interactive readings and performances, to publications and film as well as gallery based installations and activities. Here she transforms “teaser” lines from the London Evening Standard into posters and initiates a recording workshop, where students whisper—and consequently distort—a news story told from one teenager to the next. For her project in The Front Room, Weinmayr offers an editioned tabloid publication for sale to museum visitors—a composite of “revised” captions and articles from the St. Louis Post-Dispatch. By replacing the names mentioned in the paper with her own she becomes the main protagonist of all the news reported: delinquent, victim, culprit, villain or hero –all at the same time.

Vlatka Horvat was born in Cakovec, Croatia in 1974 and lives and works in New York City. She has recently exhibited at White Columns, New York; Sfeir-Semler Gallery, Beirut; Anna Kustera Gallery, New York; Millennium Galleries, Sheffield, England; CCS Bard Hessel Museum of Art; Annandale-on-Hudson, New York, The Haus der Kulturen der Welt, Berlin; and Galerija Nova, Zagreb, Croatia, among others. Her videos have been screened in galleries, studios and festivals in Europe and the US. Horvat’s upcoming exhibitions include solo shows at the Battersea Art Centre in London in November 2008 and at the Kitchen in New York in January 2009.

Eva Weinmayr was born in Germany in 1963 and currently lives and works in London. Recent exhibitions include projects at MOT International London, 5th Berlin Biennale, Yama, Istanbul, Vane Contemporary Art, Newcastle, ICA London, Kunstverein Wolfsburg, Revolver Showroom, Frankfurt and Kunstraum Munich among others. The whispered recording was originally recorded as part of the Love Your Voice workshop project at Matt’s Gallery in London. 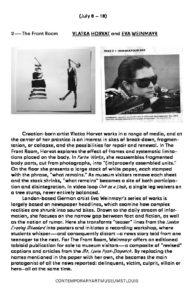